The circumstances and prospects leading to the comprehensive cooperation agreement between Okawa City, Fukuoka Prefecture and Happo-en 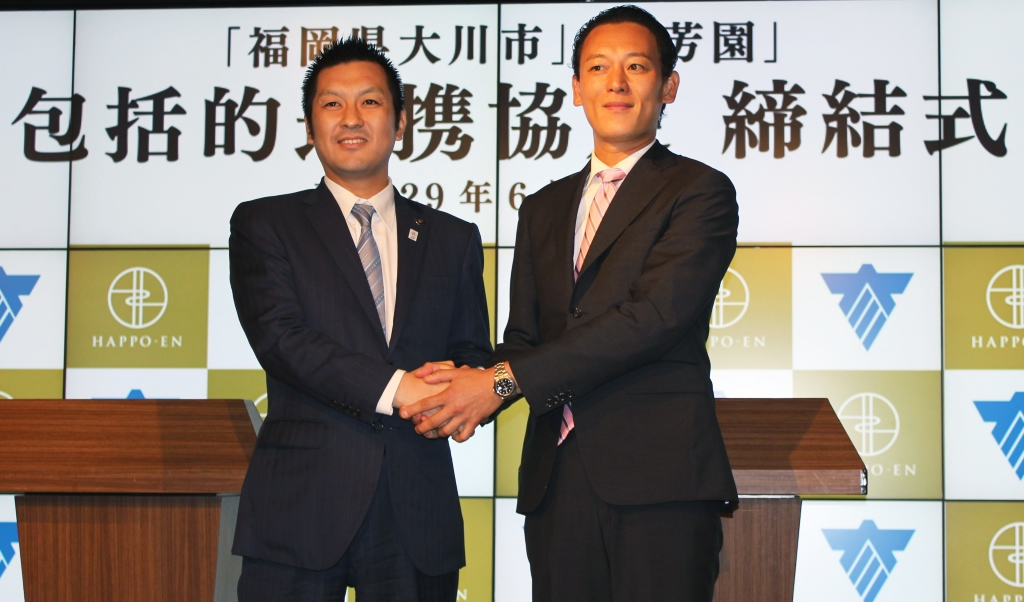 About the circumstances of this agreement.

September 8, 2013, it is the origin of the decision to hold the Tokyo Olympic Games. In Hapop-en, we developed this prefabricated tea house “MUJYOAN” by working to strengthen the inbound business to greet customers abroad.

The relationship with Okawa city was born when we started to make it while consulting with traditional woodworking artisans in Okawa city, Fukuoka Prefecture, And on April 8, 2014, it was shown at the charity event held by the ambassadors of the embassies around the world and their wives. Actually, at that time, we had planned to show off this MUJYOAN in our Japanese garden where cherry blossoms were in full bloom, but unfortunately it was raining so we set it up in the lobby in a hurry. It was the first collaboration between Okawa City and Hapop-en.

After that, we took in the skill to make wooden things of Okawa City at various events hosted by Happo-en and incentive events.

We jointly developed trays made of woodworking single boards for the service staff to use to give the guests some finger food at the party.

In addition, this prefabricated tea house MUJYOAN come to be used at wedding receptions.

And on April 17, 2015 “Touch the Japan” event was held in Taiwan. In that case, we air-transported this prefabricated tea house MUJOAN and installed it in the center of the event venue in Taiwan where about 50,000 people participated.

Many tea houses opened from Japan, so we cooperated with each of the tea houses and created the best moments for overseas customers to experience Japanese culture. When the international conference hosted by International Bar Association was held at happy-en, we entertained them with a new flavor chocolate using Okawa’s strawberry “AMAOU” in the Happo-en original chocolate gift “Kiki” And we also showed co-developed trays as chocolate-dish. After that, at the international conference of the World famous Association, we developed a portable wooden stage for performance with the theme of the Japanese festival. Of course, this is also a prefabricated tower and the name is called “KAGURA” In addition, as a cultural experience, we invited craftsmen in Okawa City to hold various festivals and various events that allow you to experience various woodworking skills such as “Kumiko” Japanese traditional handcrafted wood.

On September 15, 2015, we tied up with Okawa City and showed various contents with the title “WAZA DEPARTMENT” in Japan, an event that you can experience various Japanese traditional culture and WAZA. It is the beginning that Happo-en will do all the one – stop type planning on the MICE project in earnest. Approximately 2,000 people participated in this event, including tourism agencies, agents in tourism industry, local governments, universities and others.

Here we made various suggestions at the offsite meeting such as a tatami bench developed together with Okawa City and a party using a red bar counter.  In addition, we have also developed new contents such as a versatile prefabricated cube which can be used as a tea room and as an exhibition space. “WAZA DEPARTMENT” is held not only in Hapop-en but also throughout Japan, what was the reason for that?

We had a confidence at some events by Happo-en, we started “SUKIYAKI PROJECT” with the people of Gunma prefecture using Gunma special product Shimonita-Negi leek and Shinsyu-Wagyu Beef at Gunma branch WHITE IN TAKASAKI. After that, at the Festival to be held in Okawa City, we renovated the old Japanese style house and held events to experience various cultures.

A chance to plan and produce “Amazing Experience“ that means a surprising Japan for you at Happo-en.

It was a great opportunity to receive an order from a world famous company and rent out the whole facilities of Happo-en.

This event was a party of 2,000 people, we gave a “food presentation” that we put finger food on tree trays developed together with Okawa City. About future prospects based on the conclusion with Okawa City

In the coming 2020, the Olympic Games and the Paralympic Games will be held in Tokyo. There is a moment when Japan and the world move around Tokyo.

Towards 2020, Okawa City and Happo-en cooperate with each other to make effective use of mutual resources and carry out joint activities, so Today we have reached the conclusion.

In future, I would like to contribute to the improvement of regional revitalization through promotion of Okawa city, Fukuoka prefecture, Increase population to interact, and “providing high-quality Japanese culture experience” for overseas costumers at Happo-en.