Happo-en Hosted and Produced After-Run Party
on February 25, 2018
Reporting on the exciting night with over 1,000 overseas guests who had a pleasant experience with Japanese culture at Happo-en

On February 25, internationally marathon was held, which had about 36,000 runners from home and abroad, while the PyeongChang Winter Olympic Games, which was the most successful one ever for Japan, held its closing ceremony. As marathon was designated to select the runners who will join the 2020 Tokyo Olympic Games, it received close attention. On that day, the weather, temperature, and wind conditions were perfect for a marathon. A new record was set for the fastest Japanese runner for the first time in 16 years, making this marathon a memorable one for Japan.

About a hundred runners from overseas, who participated in the 2018 marathon, achieved completion of all the AbbottWMM* marathons.
*AbbottWMM: Abbott World Marathon Majors (The world’s six greatest marathons)

About 1,000 overseas runners and parties, including the above runners, arrived at Happo-en from 5:30 pm through 7:00 pm. Even 38 buses arrived one after the other.

Happo-en offered them a lot of entertainment, in which they joyfully could experience Japanese culture and the food of Tokyo:
- Tea ceremony in our portable teahouse which was set in our Japanese garden
- Japanese sake bar and a Japanese dance performance by geisha
- Ninja show
- Simple Japanese sweets like a rainbow cotton candy, rainbow juice, and our original Ninja sherbet
- Athlete’s food, for which Happo-en collaborated with Roppongi Total Workout*
- Tuna cutting show
- Wa-daiko Japanese drum performance
- Food which makes guests feel like they are on a Japanese houseboat, called yakatabune
- Food served in traditional Japanese style
- Jazz bar with a Japanese pianist
- Night club featuring DJ Shuya Okino
- Massage therapy room with professional massage therapists
- And more!

Each corner was crowded and well-liked by the attendees. Everyone simply enjoyed it and we couldn’t believe that they finished a full marathon just a few hours before.

A highlight of the party was an awards ceremony for the athletes who achieved completion of all the AbbottWMM marathons. All the people at the party got into the spirit and were impressed by the power of sports that unified everyone’s hearts in the ceremony. Happo-en was really happy to host the party.

In Japan, we are going to have many international sporting events in 2019 and 2020. Happo-en will improve our event-producing skills and create unique and thrilling events, in which overseas guests can experience both traditional and current Japanese culture.

Please do not hesitate to ask us anything about sporting events and business events when you plan them. Happo-en will be happy to help you to create a unique and special one. 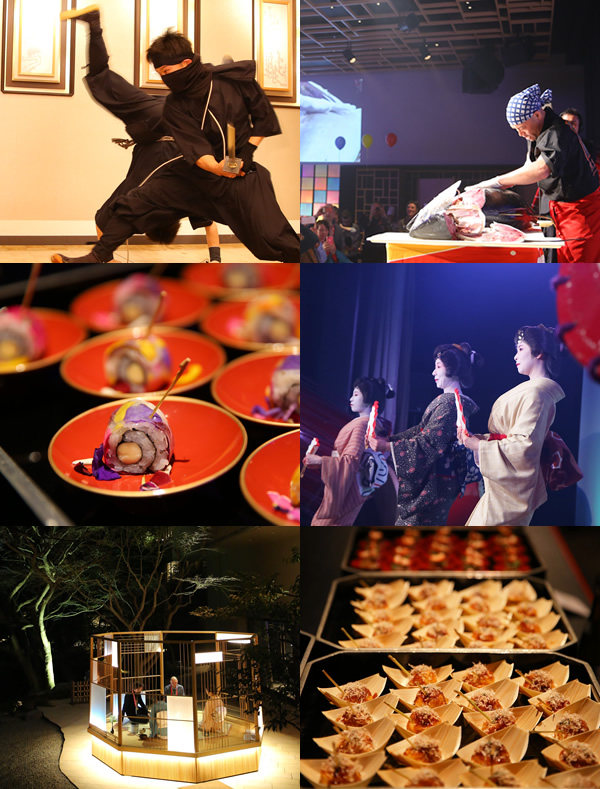 Our “SDGs Business Events 2018” on August 28 was produced by Happo-en, and we worked together coo...

Our Cherry Blossom Viewing Events at the Gardens by the Bay

On March 30, the “Sakura Japan” event started. Many attendees have visited our portable teahouse ...

Happo-en Hosted and Produced After-Run Party on February 25, 2018 Reporting on the exciting ni...

Happo-en is pleased to announce that we have begun from December 1st to serve our Halal-friendly full meal with Halal Wagyu beef at our Japanese restaurant “Kochu-an.”